If you are in Christ, you are free. Great! What does that mean?

Aren’t we all free already? Don’t we live in the land of the free and the home of the brave? Isn’t that enough? Well, actually…

So are you truly free? Just because we live in a land that is called, “the land of the free,” doesn’t mean that we are truly free. Yes, we do have certain freedoms here in America that many other countries do not enjoy. But even the laws of our land can’t give us true freedom. It can be deceiving to think that is all we need to be free. There are limits to this type of freedom, but true freedom isn’t something that any law can give you. True freedom isn’t something that just any man can give you or even take away from you. True freedom is something that is a free gift from the only One who can give it. So you get a freedom of limits from the One who is limitless.

So what is freedom? Freedom is changing from the bonds of sin which only desire to control you to taking ahold of the bonds of righteousness and Jesus who’s only desire is to lead you. It is laying down those things that try and control you and holding on to the One who loves you unconditionally, no matter what you have or have not done. It is a letting go of what controls you and actively grabbing onto that which Jesus offers.

There are many things that bind us and keep us from truly being free. Sin and the law both can do this. Sin tells us that we must do it’s will to satisfy it, but you can never do

enough to satisfy the destructive fire. At first, it may seem harmless, just a little flicker and a little glow, then some warmth, but soon, it is out of control and destroying what it can. Just a glance at another woman, or an image on the computer or magazine, doesn’t seem like it would harm anything. But it is opening the door for the sin to take hold, you are providing fuel for the sin to devour. That little glance turns into a linger which then turns into thoughts and then into actions. Sin deceives you in letting you think you have control until you get so far that you have lost control.

Similarly, the law keeps us confined in a way that we have to do such and such to satisfy it. But instead of something that consumes us, the bar is set too high for us and we fail. So we muster up what strength we have and try again, only to fail again and again. It is a standard that we can’t measure up to. It, too, can start to control us, it can even lead to us trying to control others because it becomes our focus. Then sin creeps in in the form of pride or self-pity and takes root without you even noticing it until it is too late.

So why did God give Moses the law to begin with? Didn’t He know that man couldn’t live up to the law? If that was His only purpose, then that would be one thing. But God isn’t interested in you being able to measure up to a list of laws.

Everything God has done since creation has been to prepare the way for grace. By setting the law at the only standard that would make sense, God set the stage for grace to come in and show His love to all men. If God set the standard at a level that even a small portion of men could attain it, then it wouldn’t glorify God. It would glorify those who could reach it. He would be demeaning Himself and that is not a characteristic of God. The law was set so it would reflect who God is and glorify Him.

So either through sin or through trying to live right, we get discouraged. We become distressed and start looking for a solution.

Freedom comes when you realize you aren’t under the bonds of sin, or that you aren’t under the limits of rules and regulations of the law. It comes when you fully grasp what Jesus did for you on the cross and your desires change from serving self to living purely for Christ and letting Him be your Lord. It isn’t about being controlled or trying to control, it becomes following, in your own free will, where the Lord leads because of your response to what He has done for you.

Jesus tells husbands to love their wives as Christ loves the church and also as they love themselves. To me that means that Jesus loves us the way He loves Himself. Why wouldn’t I want to love Him back the way He loves me! That is a very powerful love. A love that tells me that He loves me, period! There is no condition, exception or fine print. He doesn’t love me because of what I have done or kept myself from doing. He doesn’t love me in spite of what I have done against Him. HE JUST LOVES ME! He loves me because of who He is and there isn’t anything more.

And because He has such a love for me, then my response can only be to follow Him. He doesn’t seek to control me, He seeks to guide me. He doesn’t seek to put me down and trample on me to make Him higher, He already is lifted up and He desires to bring me to Him. And if His desire is to build me up, His love for me is pure, and He has the power to 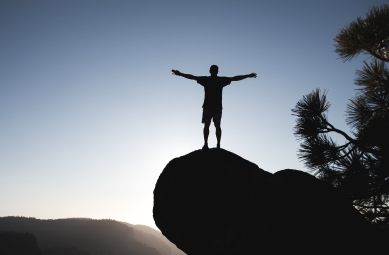 He knows all of the answers, He knows what is around the corner and I can trust Him to bring about what I need and when I need it. When my first son was taken from me because his mother moved half-way across the country, God knew that I would have a great relationship with him now. Back then, I was living for myself and now, partly through the reunification with my son, I am living for Christ. Be cautioned, living for Christ isn’t like playing a country song backwards where you get your truck back, your dog comes back and your wife returns automatically. But God will redeem your life in ways that you can’t even imagine right now.

Once you turn over your life to the Lord, He will send His Spirit to not only be around you, but on you and in you as well. The Spirit will guide by correcting you and encouraging you. It isn’t like he takes the reigns and controls you turning you into a puppet. Rather it is on you, in order to let Him guide you, you need to lay down your selfish ambitions, your desire to control, and the striving to be perfect.

By dying to yourself, giving up your control, and allowing Jesus to guide you, you will see what it means when Paul says, “For the sake of Christ, then, I am content with weaknesses, insults, hardships, persecutions, and calamities. For when I am weak, then I am strong.” (2 Corinthians 12:10) So instead of limiting your freedom, you get to experience the freedom of limits.

What are things in your life that you are holding on to because of control that, by letting go, you can actually be strengthened?

Someone who is doing his best to live purely for Jesus, be the best husband to his wife, best father to his children and then go from there... View all posts by Rob Crenshaw