In my daily devotional reading, one of the things I have been going through is the book of Exodus.  It seems that in my years of reading through the Bible I have not done much highlighting or marking in this particular book.  My usual reading of it is more of the, “Yeah, read that.  I know that.  Moses brings the people out of Egypt.  He gets the 10 Commandments.  The people are forgetful and continually lack understanding.  Aaron makes a golden calf for them and denies his participation in the outcome of that.  Yeah.  Yeah.  Yeah.”  Read it.  Got it.  Moving on.  (By the way, this is a lame way to read ANY part of the Bible.  There is always something to be seen or a new insight to be found.)

For some reason this time, I got stopped.  Something stood out to me this time that hadn’t before.  It was all the way up in chapter 32.  And I paused.  I read it for a couple of days in a row and then had to go to a commentary.  It stirred in me.

Exodus 32:26 “Then Moses stood in the entrance of the camp, and said, “Whoever is on the Lord’s side—come to me!” And all the sons of Levi gathered themselves together to him.”

There had been unrest in the camp.  Moses had been gone for days, or weeks probably at this point.  The people expected his return, but there was fire on the mountain where Moses was with the Lord.  They did not know what to make of all that was going on and their insecurities were shouting inside them.  They wanted to trust and believe in God, but they could not see Him, and maybe at this point, they were not fully certain that Moses was going to be returning to them.

Immorality was sweeping the camp and Aaron, Moses’s brother, had been left in charge of the people.  He did not have the same convictions or determination for the Lord as did his brother.  He succumbed to the cries of the people and they wanted a physical item to worship.  So the gold was gathered and Aaron fashioned a calf out of the metal and the people had an idol as their God substitute.

Before Moses came down from the mountain, God informed him of what was going on with the people.  God already knew, and was ready for wrath to come.  So Moses prayed and asked God to be willing to forgive them, yet at the same time, he too was upset with what had happened in the time he was away.  Moses then returned and prepared to stand for the Lord.   He pointed out the wrong and called to them…

“Whoever is on the Lord’s side–come to me!” 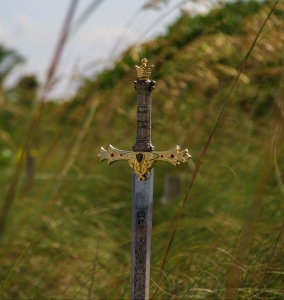 What happens next is that those who came to stand with Moses were instructed to go and pick up their sword and kill those who opposed.  The Bible says that about 3,000 died that day.

I had to take this to a commentary.  I chose to read from the David Guzik study on Blue Letter Bible.  According to this commentary he said that this was a “call to side with either God or idolatry.”  It goes on to say:

· Being on the Lord’s side requires decision.

· Being on the Lord’s side requires action.

· Being on the Lord’s side requires separation.”

So I pondered this in regard to our walk in purity with God.  I thought about what it was like when God challenged me with these things and in His way asked me the same question, “Who’s side are you on?  Are you willing to give up some things in order to walk more closely with Me?”

Thankfully, God isn’t asking me or you to grab a sword and go on a crazy sword fighting spree.  However, I do agree with Pastor Guzik when he lists those three items in order to take a stand on God’s side: decision, action and separation.  In my life, I have looked at this process as stair steps.  Not necessarily one better or worse than the other, but just the order that God chose to refine me.  It was a progressions of steps towards God, each one challenging me to make changes in my life and in my heart.

He asked me to clean up my mouth, my language.  (This actually started way before I became a believer.)  Would you believe that I used to cuss pretty bad?  Like, bad.  At first I was probably just more selective about who I let my mouth fly off to, but later, I was convicted that it didn’t matter because God always heard what I had to say.  I wanted my inside to match my outside no matter who I was around.

Then came music that I listened to.  What were the songs saying, and what did those who sang those songs represent?  Technically, whatever they stand for, I also was standing for by purchasing their music.  I also could see better how certain music enticed me to act and think in certain ungodly ways.

Movies and television that I watched were also on the list for me.  The choices I made in the entertainment I watched had to change.  It seemed to me that if it was something I didn’t want to tell someone I watched, then why was I watching it.  Often even making sure that if I wouldn’t want my kids to see it, then why would I watch it.  (Age appropriately, of course.)

God challenged me in my view of sex before marriage.  For probably three years, I had been teaching youth about saving sex for marriage until I went through a divorce in 2008 and was then challenged to walk the talk.  God wanted that commitment from me also, not just something good that I talked about.

He asked for my time and a full commitment of my heart.  Today He asks me to give Him things in different ways and to surrender struggles in my mind and on my heart.  He wants all of me to be cleansed for His good purpose.

So maybe you have already, or are now ready to make these kinds of decisions, but what about the separation part?  Since we aren’t going to literal battle over these types of things, then what is the impact if there is still a separation that has to take place?  This is where the action of taking a stand really comes in.  This is where, you may choose to not go to the movies with a group of friends anymore because of the types of movies they are watching.  It’s not going to a concert you would have gone to last year because of how that artist portrays women (or men) as objects, uses graphic language and glorifies violence and sex.  It’s breaking off a relationship because the “love” that they require has to involve sex in order to qualify for “love.”  (This is definitely NOT love by the way.)

If it is none of these things for you and you are still wondering why you aren’t connected with God then maybe it’s giving up some anger, bitterness, unforgiveness or jealousy that has been wreaking havoc in your heart.   It doesn’t always have to be a physical and tangible item that is required of you.  Most definitely it could also be matters of the heart.  However, all of the possibilities are between you and the Lord.  Your list may be similar to mine, but there will definitely be some variations.

God already knows what is going on in your life.  He sees and he longs for your commitment to Him to grow and your faith to endure.  He is not coming with the same wrath of the Old Testament, but the longing of a Father for His child.  He wants the best for you, and has already sacrificed His all on your behalf.

Through the process you may have to “cut out” a friend or group of friends.  You may have to “break off” old habits that have been coming between you and your relationship with God.  You may have to separate yourself from places you used to go, or activities you used to participate in.  There is definitely separation somewhere that will need to take place, but if that is THE thing holding you back from that closeness with the Lord you have been asking for, praying for, begging for; then that is the thing that must to go.

Some things may FEEL like you are slashing away at your heart.  You may truly feel wounded; physically, mentally, emotionally, spiritually.  However this is the process.  A decision must be made by you if you are going to stand for or against the Lord.  That decision will lead you to an action or set of actions that must take place.  We are called to be set apart, separated.

Psalm 4:3 –“But know that the Lord has set apart for Himself him who is godly; The Lord will hear when I call to Him.” 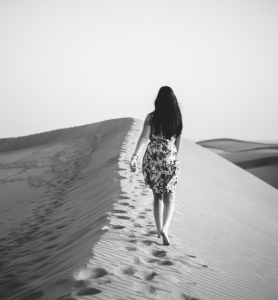 So then, what do you gain?  With all of this loss, what’s the draw?  What if I like my friends and my way of doing things?  What if I don’t see a need for change, or like those in the camp with Aaron while Moses was on the mountain top, you want something more tangible or something you can control as far as your “God life” is concerned.

The line is drawn in the sand.  The world calls to you on one side to come a be a part of its ways.  However, the Lord is on the other side and the testimony of His Word shouts for you to come!  Stand in the might and the power of God.  Let Him change you.  Don’t be caught with those who side with the world and therefore stand against God.

There is blessing awaiting you upon your surrender and your opposition to whatever it is keeping you from being fully on the Lord’s side.

I grew up in the mid-west with a mind full of dreams and a rebellious heart. I have chased the emptiness of the world and have finally found real joy. Today, as a Christian woman, a wife, mother, daughter, and friend, I have a passion to point the women I meet in the direction of the One who knew me before I cared to know Him. I believe big in the power of Christ unto salvation fully knowing that you don't have to choose the hard road. I have a tenderness for the lost, a love for the broken, and a desire to make a difference. Join me on this journey as we strengthen one another and live expectantly for eternity. View all posts by Jenna Crenshaw