Think about yourself 10 years from now if everything goes the way you want it to go. How do you look, think, act, etc? Now think about yourself 5 years from now. How do those two compare? Is there growth between 5 and 10 years? Now think of yourself today. How do you compare to the 5 year you or the 10 year you? Now go look in the mirror. How does this compare to your thought of you today?

This isn’t some self-help, motivational, build yourself up rhetoric. We are going somewhere with this. Hang on!

We started with a far off goal with everything working right. Then brought that closer. 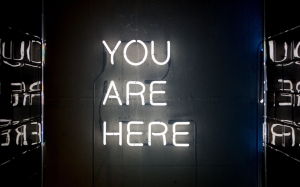 But do you truly know who you are? Are the thoughts you have about the current you true? Is what you see in the mirror actual? What do you look at when you look in the mirror?

There was a video on social media of a husband using the caption, “When in Texas…” as he is zoomed in on a pair of fancy women’s cowboy boots. As he pans out, you see his wife ‘modeling’ the boots. As the video continues, the wife turns to the mirror and after glancing at the boots for a split second, she starts fixing her hair. She wasn’t looking at what was “good” – meaning the new boots, she instantly went right to the hair that was out of place.

We all do it! We look for the flaws, the things out of place, the thing we don’t like. We each have different reasons why we judge our own looks. It comes down to that there is some standard that we have adopted and use to compare ourselves.

There is one standard that many don’t adopt.

They have all turned aside; together they have become corrupt; there is none who does good, not even one. – Psalm 14:3

People use a standard of looks, wealth, or status to judge themselves and to build their goals upon. Their focus is on themselves and they take it upon their own self to make this goal happen. They struggle and strive and work harder and harder.

What if we accepted the standard that no one does good? Not because we don’t think people can do good things, but because we understand that, by ourselves, we do become corrupt. We become self-focused and only desire to feed ourselves, improve ourselves, change ourselves. What if we looked at the truth, of not only who we are in and of ourself, but also Who has the power to actually change us.

We need to be honest here. We, you, us… all need to be honest with ourself and each other. In our minds, we think we are good, but our thoughts betray us when something doesn’t go our way. When we look to the physical, we look for the flaws to cover them up, to hide them, to make them appear as something worthwhile. But no one sees on the inside. We can’t cover the inside up because it is seemingly invisible. The standard that most people won’t adopt isn’t about looks or status. It is about the truth of us in our heart.

“For no good tree bears bad fruit, nor again does a bad tree bear good fruit, for each tree is known by its own fruit. For figs are not gathered from thorn-bushes, nor are grapes picked from a bramble bush. The good person out of the good treasure of his heart produces good, and the evil person out of his evil treasure produces evil, for out of the abundance of the heart his mouth speaks.”  Luke 6:43-45

There is the question that goes, “What do you get when you squeeze and orange? – Obviously it is orange juice. What you are on the inside is what is going to show up on the outside. Yes, we all can put on a good front here and there. Who has experienced the parent who is yelling at their kid one second and then answering a phone call with the sweetest voice the next? Some people can hold this front a long time, but eventually the inside will show.

Rob worked at a youth home when he was younger and there was one boy that came in, an older teen who had made some poor choices and got caught. For the first few weeks, he did not get any consequences because he did what he was supposed to do. No cussing, no fighting, no rule breaking. But Rob liked to mess with the boys at times and came up behind this kid while he was watching TV and startled him. And the first cuss word just flowed out. It wasn’t out of malice or hatred, it just was what was inside of him. His defenses were down and the truth came out.

What situations have you experienced where that part of you that you are so good at ‘controlling’ comes out unbridled? Maybe it is a short outburst of anger when you are tired. What about that pang of jealousy that comes out in a glare when someone else receives a promotion or an award that you were going for? Or possibly it was the little smile when someone you don’t get along with gets hurt? Or the lie that comes at the hope of self preservation that you know just digs the hole deeper.

We have all done these things from one degree to another. At times we haven’t even batted an eye at our actions and other times we are repulsed at what we did. “How could I even say that?” But each occurrence shows what is in our hearts. It shows, that no matter how hard we try, it is still present and will come out no matter how long the dormancy lasts.

So how do we go from producing evil to producing good? How do we climb these seemingly impossible stairs? 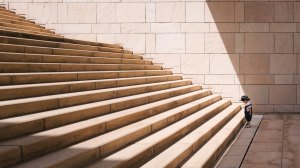 We can try to do it on our own. We can “practice” doing good. Use the whole, “fake it until you make it approach.” If I act like a good person long enough, then maybe I will become one. But we have already shown that this approach isn’t good enough. The bad fruit still comes out.

The good news is, it isn’t something we do. But it is something we allow. We allow God, through the Holy Spirit to search us out. To do a house inspection, so to speak. We allow him access to every nook and cranny in order to shed light on the bad roots. We allow Him to put a mirror in front of us with a spotlight on our heart to reveal our true condition. Then we lean on the Lord as He strengthens us in those moments. We may be tired, but because of His strength we show grace instead of frustration. We may desire the attention, but through His prompting, we rejoice in the life of another. We may struggle to get along with someone, but when they fall, our hearts mourn form them because God has taken our hearts of stone and given us a heart of flesh.

It isn’t a matter of practicing good. It is a matter of choosing to listen and to respond in obedience. Our flesh will still desire to do it the old way. And each opportunity that is presented to us is one that we get to practice true freedom through obedience. And then, each step is a cleansing of the heart, a renewing. And soon, we will be living out, “The good person out of the good treasure of his heart” producing good. Because God is the one who puts the good treasure there.

Finding strength in purity. It's not our story, it's His. View all posts by Rob and Jenna Crenshaw